For more information on the structure of the Board, please consult the Society’s Statutes. 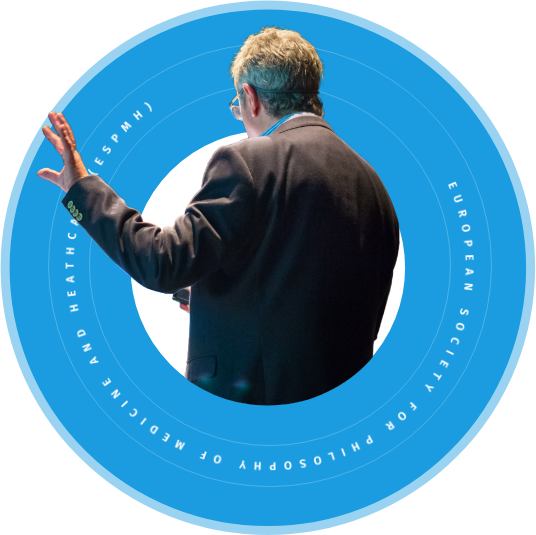 Péter Kakuk, MA, PhD is teaching medical ethics and bioethics as an assistant professor at the Department of Behavioral Sciences, Faculty of Public Health, University of Debrecen, Hungary. He studied philosophy at the University of Debrecen and Health Care Ethics and Law at the University of Manchester. He has a PhD in Health Sciences. He is member of the Hungarian Medical Research Council, and associate member of the European Network of Research Ethics Committees. He is the Chair of the Hungarian Working Group for the Cambridge Consortium on Bioethics Education and book review editor for Medicine Health Care and Philosophy. His primary research interests are related to continental philosophy, biopolitics and bioethics, ethics of genetics, research ethics and scientific integrity.

Gerrit K. Kimsma has been university associate in medicine and philosophy, practicing family medicine since 1976 and teaching medical ethics and philosophy to medical students and medical ethics to Post Graduate Training for Family Medicine at the Vrije Universiteit at Amsterdam since 1970. Publications since 1975 in numbers of about 100 articles in journals, books and papers, about 60 presentations in Europe (Germany, Austria, Switzerland, Spain, Italy, France), USA and Australia. Book publications since 1987, starting with ‘Medicine between Dream and Drama’,(with HAMJ ten Have), last major book publication with Thomasma, Kushner and Ciesielski called ‘Asking to Die. Inside the Dutch Euthanasia Debate.’ , Kluwer Academic Publications, Dordrecht/London/Boston, 1998, with ethical and legal discussions, interviews with families where euthanasia took place, and interviews with physicians who describe their experiences).

Bert Gordijn is Professor and Director of the Institute of Ethics at Dublin City University in Ireland. He has studied Philosophy and History in Utrecht, Strasbourg and Freiburg in Breisgau. In 1995 he was awarded a doctorate in Philosophy from the Albert-Ludwigs-Universität Freiburg, followed by a doctorate in Bioethics from the Radboud University Nijmegen in 2003. Bert has been a Visiting Professor at Lancaster University (UK), Georgetown University (USA), the National University of Singapore and the Fondation Brocher (Switzerland). He has served on Advisory Panels and Expert Committees of the European Chemical Industry Council, the European Patent Organisation, the Irish Department of Health as well as UNESCO. Bert is Editor-in-Chief of two book series:”The International Library of Ethics, Law and Technology” and “Advances in Global Bioethics” as well as a peer reviewed journal: “Medicine, Health Care and Philosophy“, all published by Springer. He is Secretary of the European Society for Philosophy of Medicine and Healthcare as well as President-Elect of the International Association of Education in Ethics.

Ignaas Devisch (1970) PhD is professor in Ethics, Philosophy and Medical Philosophy. He holds a position at Ghent University, department of Public Health and Family Medicine, and is chairman of the research group PME (Phil of Medicine and Ethics) at Ghent University. He was researcher for five years at the Radboud University Nijmegen. He publishes in the fields of medical philosophy, philosophy and ethics. He organised the ESPMH conference in 2015 in Ghent. He was chairman of a Belgian organisation (de Maakbare Mens) which reflects ethically and philosophically upon biomedical evolutions. As a philosopher, he works at the faculty of Health Sciences and Medicine. Since 2003, he teaches philosophy of medicine, ethics and bioethics. Research areas: philosophy of medicine (patient autonomy; responsibility; lifestyle; obesity; justice); ethics; His research focuses mainly on Autonomy, lifestyle and responsibility in healthcare. On a regular basis, he intervenes in public debates on issues regarding philosophy of medicine or social philosophy. He is also member of the Advisory Council of Bioethics in Belgium. Full list of publications. For all information, see: www.ignaasdevisch.com

Dr. Eugenijus Gefenas is professor and director of the Department of Medical History and Ethics at the Medical Faculty of Vilnius University. He is also director of the Lithuanian Bioethics Committee. Eugenijus Gefenas graduated from the Medical Faculty of Vilnius University in 1983 and obtained his Ph.D in medical ethics from the Institute of Philosophy, Sociology and Law in 1993. Eugenijus Gefenas teaches bioethics at the Medical Faculty of Vilnius University and is a co-director of the NIH Fogarty International Center funded training program “Advanced Certificate in Research Ethics in Central and Eastern Europe”. He is a member of the Council of Europe Committee on Bioethics and was chairing this Committee in 2011-2012. In 2014 he was appointed to represent Lithuania at the Bureau of the Intergovernmental Bioethics Committee (IGBC) of UNESCO and was elected as the president of this Committee in 2015. In 2017, Eugenijus Gefenas became a member of the new European Group on Ethics in Science and New Technologies appointed by the President of the European Commission. The areas of his recent professional interest include conceptual and normative issues related to human research and health care in the transition societies. The list of his publications is available at: http://www.mies.mf.vu.lt/en/about/personnel/doc-dr-eugenijus-gefenas

Prof. Dr. med. Dr. phil. Fuat S. Oduncu, MA, MBA, European Master in Bioethics, was born in Midyat (Turkey) in 1970. He studied medicine (Dr. med., University of Munich), Philosophy (M.A., Jesuite Private University; Dr. phil., University of Munich), Bioethics (European Master in Bioethics at the Universities of Nijmegen, Leuven, Madrid, Padova), and Health Care Business Administration at the Munich Business School in Cooperation with the Boston University School of Management (MBA). In 2005 Prof. Oduncu passed his Ph.D. (Habilitation) in Internal Medicine at the Faculty of Medicine at the University of Munich, and in 2013 he was appointed Professor of Medicine. Besides, Prof. Oduncu passed several medical qualifications: internal medicine, hematology and oncology, palliative medicine, hemostaseology, and medical quality management. Since 2007 he is heading the division of Hematology and Oncology, Medizinische Klinik und Poliklinik IV, University of Munich. Moreover, Prof. Oduncu teaches medicine and medical ethics at several universities, and he is member of several national and international scientific societies. He published more than 200 scientific medical and ethical contributions on cancer, organ transplantation, brain death, reproductive medicine, embryo research, palliative care, euthanasia, and priority-setting in health care. Prof. Oduncu has been awarded several scientific prizes, among others with the prestigious Vincenz-Czerny-Prize for Oncology and the m4-Award for Personalized Medicine by the joint Excellence Cluster of the Bavarian Ministry of Economics and the Federal Ministry of Education and Research. In 2016, Prof. Oduncu has been elected President of the Erich-Frank-Society (EFG, for the promotion of the German-Turkish relationship between the Medical Universities of Munich and Istanbul), and in 2017 he has been elected President of the World Medical Association of Suryoye (WMAS, for the medical promotion of the Aramaeic and Assyriac people).

Luciana Caenazzo is Associate Professor in Legal Medicine at Dept. of Molecular Medicine of University of Padua- Padova –Italy. She holds graduate school in Medical Genetics at the University of Padua and she was awarded a PhD in Forensic Sciences at the Catholic University of Rome and, in the same University, a Master in Ethical Consultation. Since 2002, she is in charged pre-and postgraduate teaching of Legal Medicine and Bioethics of medical, healthcare professionals and law students of University of Padua. She is member of the Scientific committee of Fondazione Lanza, Padova Italy and in the last two years member of the Fondazione Lanza project “Ethics and Emerging Technologies: a Population-based Health Monitoring Project. The areas of her recent professional interests include ethical aspects of clinical genetics, forensic genetics and justice administration, gender medicine and ethical perspectives regarding new technologies and big data management. She has published about 80 papers edited several collaborative books in the areas of forensic sciences, bioethics and clinical ethics.

Frida Simonstein is Visiting Scholar at the School of Public Health of Ben-Gurion University in Israel. She holds an MSMedSci in Human Genetics from the Sackler Medical School at Tel Aviv University in Israel (1994) and was awarded a PHD in Health Care Ethics and Law, from the Centre of Social Ethics and Policy at the University of Manchester, in the UK. Frida has been a Visiting Professor at the University of Hohenheim in Stuttgart, Germany, The Hastings Centers in the USA, the Institute for Medicine Law and Bioethics at Liverpool University in the UK, Queen Mary University of London in the UK and the World Health Organization in Geneva. She has served on the Stirring Panel on the Ethics of Human Genetics at the International Center for Health Law and Ethics of Haifa University in Israel. She has published a book entitled ‘The Ethics of Self-Evolution’ (Yozmot, 2004); and edited a collaborative volume entitled ‘Reprogenetics and the Future of Gender (Springer, 2009). She has published several dozens of papers in the areas of human genetics, reproduction and novel technologies, some of which have been published in the journal Fertility & Sterility and the Journal of Genetic Counseling. She organized the 2012 conference of the ESPMH in Nazareth. Presently, Frida is a member of the Centre of Health, Humanism and Society at Ben Gurion University.  She is writing a new volume entitled ‘Womb Politics’. In addition, she is leading a research project to validate Self-Expression through Typing (SETT), a method aiming at the development of communication skills of thoughts and ideas, among non-verbal autistics in Israel.

Looking at attending our 2022 Conference in Poland?

Our 34th European Conference will be held in Warsaw, Poland. Register here to attend our upcoming 2022 conference.